In the play, "As You Like It", William Shakespeare famously writes, "All the world is a stage, and all the men and women merely players." 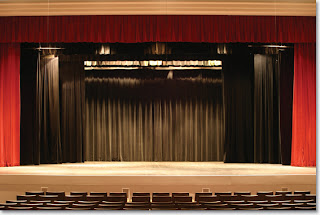 But that quote is a rather sad and de-valuing explanation of our lives, don't you think? It takes the reality and life and sweat and blood out of our everyday existence and distills it down to us just flitting across a stage, acting our part, until the final curtain closes.

But I have been drawn up lately by the thought that really our lives ARE a stage. Now, don't worry, I don't mean that in any of the way ole' Bill Shakespeare did.

Here is an example of what I mean:
In Philippians, Paul is writing to exhort the converts who reside in Philippi, and he is writing from a Roman jail, a jail he remains in for two years!

You know he might have felt a little upset at being waylaid from his missions. After all, Paul had a divine commission from the Lord! He had work to do! He had places to be and people to meet! What was he doing sitting around in a Roman prison for over two years?

So does he complain? Just listen to this:


"Now I want you to know, brethren, that my circumstances have turned out for the greater progress of the gospel so that my imprisonment in the cause of Christ has become well known throughout the whole praetorian guard and to everyone else,"

You mean he isn't upset? He isn't complaining? He isn't asking them to start a letter writing campaign to get him released?
The answer is "NO!" No, he isn't. 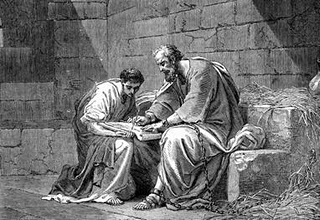 Because he sees his circumstances as just the back drop....the scenery....the props, if you will. The circumstances are simply part of the stage, the stage from which can be proclaimed the reality, the power, the wisdom, and the supernatural character of God.
And if God gets proclaimed louder and better from inside a Roman prison, then by golly, Paul is willing to get thrown into that prison.
Can we look at our circumstances that way?
Those are all bad circumstances, just like jail is a bad circumstance. But if those circumstances lead others to hear about the Lord or see His work in our lives....what then? Would they be worth it then?
For Paul his imprisonment meant several things, besides that he got to catch up on his letters and give us not only Philippians, but also Ephesians, Colossians, and Philemon. Additionally, on top of writing all those letters, he also made sure that the "cause of Christ had become well known throughout the whole praetorian guard and to everyone else." (vs 13)

"For the eyes of the Lord move to and fro throughout the earth that He may strongly support those whose heart is completely His."    ~II Chronicles 16:9